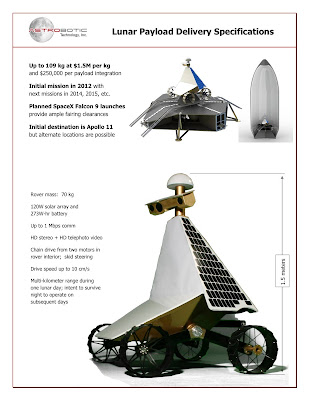 The Google Lunar XPRIZE team Astrobotic has been busy. President David Gump has tipped me off that with the details of its lunar-rover-in-progress being finalized, the team is now soliciting ideas for commercial payloads.

A total of 240 pounds of payload is up for sale. At $700,000 a pound, it won’t be cheap, but Gump says 11 pounds are already accounted for in the form of the cremated remains of people of who want to be buried in space. Ideas for other payloads include systems for detecting water, producing oxygen, and prospecting for buried lava tubes suitable for conversion into habitats.
The Google Lunar XPRIZE is the brainchild of Peter Diamandis, who founded the Ansari XPRIZE for the first manned space flight, which Scaled Composites won in 2004. Now 20 teams from around the world are competing for a $30 million purse for the first to land a privately funded rover on the moon before 2015.
Astrobotic seems to have what it takes to pull it off: Raytheon (a major defense contractor) and Carnegie Mellon University as partners, and the mad genius of Red Whittaker (whose team won the DARPA Urban Challenge robot car race in 2007) as chief technical officer.
The team plans to land at the Apollo 11 site, which hasn’t been seen up close since Neil Armstrong and Buzz Aldrin departed the surface of the moon in 1969. Mission planners hope that stereo cameras on the rover will reveal the site all its magnificent desolation for the first time in more than 40 years.