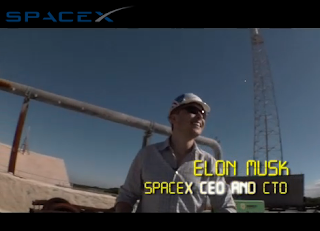 President Obama is set to address the nation on his new direction for space exploration any minute now. Meanwhile, this just in from Space Exploration Technologies CEO Elon Musk on what it could mean. Heady stuff, and I think he’s got it exactly right.

At Long Last, an Inspiring Future for Space Exploration
The Apollo Moon landing was one of humanity’s greatest achievements. Millennia from now, when the vast majority of the 20th century is reduced to a few footnotes known only to erudite scholars of history, they will still remember that was when we first set foot upon a heavenly body. It was a mere 66 years after the first powered airplane flight by the Wright brothers.
In the 41 years that have passed since 1969, we have yet to surpass that achievement in human spaceflight. Since then, our capability has actually declined considerably and to a degree that would yield shocked disbelief from anyone in that era. By now, we were supposed to have a base on the Moon, perhaps even on Mars, and have sent humans traveling on great odysseys to the outer planets. Instead, we have been confined to low Earth orbit and even that ends this year with the retirement of the Space Shuttle.
In 2003, following the Columbia accident, President Bush began development of a system to replace the Shuttle, called the Ares I rocket and Orion spacecraft. It is important to note that this too would only have been able to reach low Earth orbit. Many in the media mistakenly assumed it was capable of reaching the Moon. As is not unusual with large government programs, the schedule slipped by several years and costs ballooned by tens of billions.
By the time President Obama cancelled Ares I/Orion earlier this year, the schedule had already slipped five years to 2017 and completing development would have required another $50 billion. Moreover, the cost per flight, inclusive of overhead, was estimated to be at least $1.5 billion compared to the $1 billion of Shuttle, despite carrying only four people to Shuttle’s seven and almost no cargo.
The President quite reasonably concluded that spending $50 billion to develop a vehicle that would cost 50% more to operate, but carry 50% less payload was perhaps not the best possible use of funds. To quote a member of the Augustine Commission, which was convened by the President to analyze Ares/Orion, “If Santa Claus brought us the system tomorrow, fully developed, and the budget didn’t change, our next action would have to be to cancel it,” because we can’t afford the annual operating costs.
Cancellation was therefore simply a matter of time and thankfully we have a President with the political courage to do the right thing sooner rather than later. We can ill afford the expense of an “Apollo on steroids”, as a former NASA Administrator referred to the Ares/Orion program. A lesser President might have waited until after the upcoming election cycle, not caring that billions more dollars would be wasted. It was disappointing to see how many in Congress did not possess this courage. One senator in particular was determined to achieve a new altitude record in hypocrisy, claiming that the public option was bad in healthcare, but good in space!
Thankfully, as a result of funds freed up by this cancellation, there is now hope for a bright future in space exploration. The new plan is to harness our nation’s unparalleled system of free enterprise (as we have done in all other modes of transport), to create far more reliable and affordable rockets. Handing over Earth orbit transport to American commercial companies, overseen of course by NASA and the FAA, will free up the NASA resources necessary to develop interplanetary transport technologies. This is critically important if we are to reach Mars, the next giant leap in human exploration of the Universe.
Today, the President will articulate an ambitious and exciting new plan that will alter our destiny as a species. I believe this address could be as important as President Kennedy’s 1962 speech at Rice University. For the first time since Apollo, our country will have a plan for space exploration that inspires and excites all who look to the stars. Even more important, it will work.
–Elon–