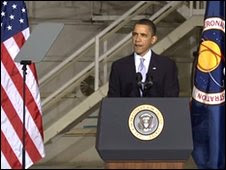 NASA hasn’t had a clear mission for manned spaceflight since landing on the moon 40 years ago. With his speech today at the Kennedy Space Center, President Obama made the boldest move to get it back on on track since President Kennedy sent us to the moon in the first place.

While it may lack the ring of Kennedy’s “let’s go to the moon before the end of this decade,” Obama’s “We’ve been there before. There’s a lot more to explore” for the first time puts the country on a sustainable course beyond low Earth orbit.
The shuttle has been flying in circles for almost 30 years. Nothing in the works at NASA would have done any better. We have to do better than that, Obama told the crowd of space workers and dignitaries.

“Nobody is more committed to manned spaceflight, to human exploration of space than I am. But we’ve got to do it in a smart way. And we can’t just can’t keep on doing the same old things that we’ve been doing and thinking that somehow is going to get us to where we want to go.”

Key to doing it smart, said Obama, is tapping private industry to handle routine access to low Earth orbit, while NASA works the big problems: developing new propulsion technologies, working on a heavy lift vehicle (to the tune of $3 billion), and sending robotic probes around the solar system. Overall budget increase for NASA over the next five years: $6 billion.

Obama’s speech represents the clearest support for private space flight possible. Obama even opened his speech with mention of the SpaceX Falcon 9 rocket now on pad 40 undergoing final checkouts before its planned maiden voyage next month.

“By buying the services of space transportation rather than the vehicles themselves, we can continue to ensure rigorous safety standards are met, but we will also accelerate the pace of innovations as companies, from young startups to established leaders, compete to design and build and launch new means of carrying people and materials out of our atmosphere.”

That’s great news for anyone who wants to see space become a place to do business on a regular basis, and not just a government program, as Obama as much as pointed out.

“We will actually reach space faster and more often under this new plan, in ways that will help us improve our technological capacity and lower our costs, which are both essential for the long term sustainability of space flight.”

Now it’s up to private space companies such as SpaceX, the linchpins of Obama’s new plan, to demonstrate the right stuff. A successful launch by the Falcon 9 next month will go a long way in that direction.