If We Can Put a Man on the Moon… 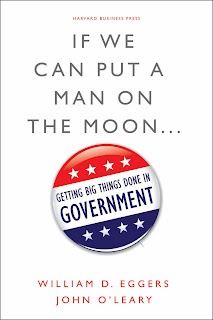 Anyone who thinks that the Obama administration’s plan to replace the Space Shuttle with private space taxis is inherently riskier than the status quo needs to read William Eggers and John O’Leary’s book, If We can Put a Man on the Moon…: Getting Big Things Done in Government. Especially the chapter on complacency, which says:

“The Complacency Trap occurs when the way things are blocks our vision of what could be. In many cases, this means that risk will go unappreciated until after a disaster has occurred.”

The book discusses how NASA’s internal culture grew so complacent with the risks of the Space Shuttle and its design (solid fuel rockets with leaky O rings, and flying insulation striking delicate heat shield tiles) that even after numerous close calls, managers refused to take action to prevent disaster from occurring–twice.

I would add that even after two catastrophic failures, managers still saw fit to replace the shuttle with a capsule riding an extended version of the same crappy solid fuel rocket, whose additional segments and seals would pose even more threat to vehicle and crew.

Obama’s plan gets NASA out of the Complacency Trap by giving new players a chance to get the job done right. SpaceX, the company that’s number one on the runway, started with a clean slate design based on tried and true principles. The Falcon 9 uses good old fashioned lox-kerosene engines that have already successfully launched two satellites into orbit.

Change is inevitable. Private enterprise will open the final frontier. The only question is whether legislators and old-line NASA managers will get out of the Complacency Trap and get on board, or get run over by the bus.