Our Space Future at the American Museum of Natural History 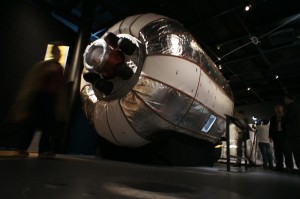 A Bigelow Aerospace inflatable habitation module looms out of the darkness at the American Museum of Natural History in New York.

Suborbital flight, moon bases, inflatable space stations, a lunar elevator, liquid telescopes, planet-shaping engineering, and ocean-going space probes: they’re all part of the newest exhibit at the American Museum of Natural History in New York City. I tagged along on a press preview of Beyond Planet Earth: The Future of Space Exploration this week, and liked what I saw, a lot.

It’s a measure of how far the commercial space flight industry has come that the future vision presented by this exhibit includes a good representative of the private companies that are working to build a permanent presence in space, and not just the usual NASA pipe dreams.

There’s a 1/3-scale model of an inflatable Bigelow Aerospace habitat, along with a diorama of several such habs together making up a moon base. (A working demo also shows how a telescope with a liquid mirror the size of a football field could form the core of a lunar observatory.)

There’s a model of Virgin Galactic/Scaled Composites’ SpaceShipOne and White Knight 2, along with a display on SpaceX. There’s model of a lunar elevator (a cable anchored on the moon stretching out into space for electric powered vehicles to come and go from the surface), a Mars ship model, and a detailed treatment of what it will take to terraform Mars, complete with a touch screen table for you and your friends to heat up the polar caps and drill for water yourselves.

Exhibit curator Michael Shara explained terraforming at this week’s press event, and why he made it a centerpiece of the exhibit:

“We are almost certainly going to start terraforming mars, changing it into an Earth-like world. After all you back up your hard drive every day, or you should anyway. We should back up life….and mars is the closest and best place to do that, to make sure that we don’t suffer the same kind of fate that the dinosaurs did. They were around for 200 million years. They didn’t invent telescopes. They didn’t figure out an way to deflect an asteroid, something that we discuss in the exhibition. You can visit them here in the halls, but they’re all fossilized. We don’t want to go that way. We want to be able to do something much more dramatic, and that is, I think, in the next few hundred years, start expanding away from our little womb here out into the solar system, and then to the first star, and the next one, and the next one, and across the galaxy.”

Shara said he and his team aim to inspire young people with a vision of humanity as an interplanetary civilization. Just because NASA has retired the Space Shuttles doesn’t mean we’re done traveling to space, he said. Instead, “We’re really just at the beginning.”

The exhibit does an excellent job showing just how and why we’ll get to space to stay, through entertaining, informative, and engaging displays and interactive elements that also puts it all in the context of humankind’s past achievements in space. It’s well worth the visit, and not just for the kids.

Beyond Planet Earth: The Future of Space Exploration opens at the American Museum of Natural History in New York City on Saturday, November 19, and runs through August 12, 2012. (See also my photostory on the exhibit on popularmechanics.com.)