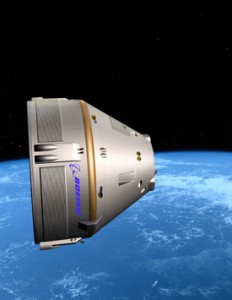 At a Southern California YPO meeting in February, I moderated a discussion between Virgin Galactic’s Will Pomerantz and Boeing’s John Schindler.

As Director of Program Integration for Boeing’s Commercial Crew Program, Schindler is one of the managers in charge of Boeing’s spaceship-in-development, the CST-100.

The ship is one of those competing to replace the retired Space Shuttle for getting crew and cargo to the International Space Station. Schindler characterized the ship as a no-frills, get-up-and-get-down vehicle using proven technologies.

“When we looked at the requirement set from our customer [NASA], and they said ‘Well, we want something that’s safe and affordable, cost-effective, reliable,’ we knew these technologies already existed. We already knew the blunt capsule that we saw on Mercury, Gemini, Apollo, that the Russians use, are proven technologies. So we went with that to provide them what they want. They didn’t want a Cadillac, they really just wanted a minivan to get back and forth.”

This is in contrast to the Boeing competitor that is farthest along in its development, SpaceX. SpaceX is operating on its own set of requirements, for which the NASA requirement for Space Station access is just a subset. SpaceX wants to get all the way to Mars. Boeing is focused on the one mission, and says Schindler, drawing on Boeing’s 50-year heritage in space to get there.

“We’ve designed a space capsule that looks very similar to what the old capsules looked like. It actually can carry seven people. It kind of looks like a minivan—you got three [astronauts] on top and four on bottom. We have a pilot and a copilot, but it will fly autonomously. It will have an autonomous docking to the space station. We’ll put it on top of a rocket. Right now for our test program we’ve chosen a very reliable rocket. It’s never launched humans into space, but it’s flown over 100 times successfully, and that’s an Atlas V.”

The company certainly has the wherewithal to build and launch this system, but it is utterly dependent on NASA to make progress, and there’s the rub. “We’re in a design phase right now,” Schindler admitted. SpaceX, on the other hand, is now in flight test, with its first docking with the Space Station planned for April.

“Think of yourselves, in the YPO,” Schindler explained. “If you were trying to make a business case, and you were saying, ‘Well, if I’m going to go invest this money, I’ve got to have a market at the end that I’m going to be able to sell [to] and reclaim that [investment]. And there isn’t a market right now except for NASA. The Boeing company sees there’s a potential market, but it isn’t enough to close the business case on our own.” As a consequence, said Schindler, “We’re kind of hitched a little bit to NASA and Congress, and those things are big unknowns, depending on how much money’s available.”

What this boils down to is that Boeing, the big, established aerospace company with a lot to lose and shareholders to keep happy, isn’t going to lead in the way in creating America’s first commercial orbital spaceships. That’s left to younger, hungrier companies like SpaceX—whose CEO, Elon Musk, is prepared to take the big financial risks required to really move the ball in the field of commercial space flight.