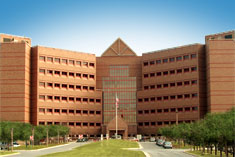 I’m en route to San Antonio to give the keynote speech at an internal meeting at the Brooke Army Medical Center.

Along with dealing with getting my presentation slides through the door (no flash drives! no laptops!), this has me thinking about the role of government versus private enterprise in fostering innovation.

There’s a role for both, of course. Government agencies and research centers can afford to have a vastly longer timeframe for seeing a new development through to fruition. Look at the Internet. Went online as ARPANET in 1969. Took decades to start to fulfill its commercial promise.

Businesses have to move quickly or die. That’s a blessing and a curse. There’s every incentive to make efficient use of resources, especially at the beginning, and competition is a spur to greater innovation.

Government agencies have a way of getting mired in outmoded ways of doing things. Bureaucracies can form whose major function seems to be furthering the organization.

Big businesses aren’t immune to these pitfalls, of course. Which is why innovators in both government and the private sector are most successful when they emulate small companies: doing more with less; streamlining the chain of command; incentivizing performance; and focusing narrowly on a well-defined mission–some of the things I’ll talk about in my speech tomorrow.