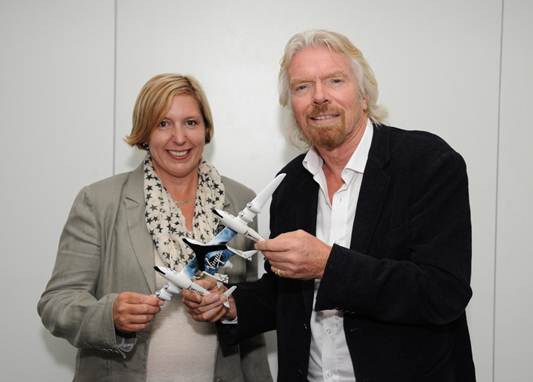 Six hundred people have now signed up for a ride on the Scaled Composites SpaceShipTwo rocketplane. Initial cost was $200,000, but Virgin Galactic, billing itself as the world’s first spaceline, has bumped the price to $250,000.

That represents at least $120 million in revenue. These folks are just paying deposits at this point, but it’s essentially money in the bank for Virgin if it can deliver the goods: a couple-hour ride out of the atmosphere and back for an otherworldly view of the Earth’s curves set against a black daytime sky and a few minutes of weightlessness.

It’ll be 9 years this year since SpaceShipOne proved that a privately built craft can rocket people into space. Some of those 600 Virgin customers have been awaiting their chance to fly since then, though not customer number 600, Marsha Waters, pictured here with Virgin owner Richard Branson. She made the decision to fly at the end of April, when SpaceShipTwo achieved its first powered flight.

Said Waters in a statement from Virgin released today:

“After watching Virgin Galactic’s supersonic test flight at the end of April, I thought “this is it” and made the decision to purchase my ticket to space while I still had the chance. It’s a big step and a major financial commitment for me, but I know it will be the most exciting, worthwhile adventure I will ever embark upon.”

That adventure will soon belong to all, even those who don’t go themselves, as increasing numbers of space flight participants return to Earth with changed perspectives and stories to tell. We’ll all get to look up with them.