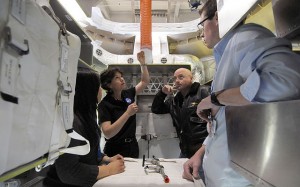 Last April, President Obama set NASA on a course that will have it chartering commercial flights to the International Space Station after the Space Shuttle retires this year, freeing up R&D money for exploration beyond low Earth orbit.

It’s a big change for NASA since the agency has always owned and operated its own vehicles. But shortly after Obama made the announcement, SpaceX, a California startup, proved that private industry has the right stuff.

Congress is still fighting the winds of change, refusing to pass NASA’s 2011 budget and forcing it to continue pouring money down the black hole that is the Constellation program for a new government-owned vehicle.

Nevertheless, change is inevitable, no matter how it plays out. Just how it does out will be the subject of next week’s FAA conference on commercial space flight in Washington. For two days (February 9 and 10) those in charge of implementing the new policy will meet with space industry leaders who say they can pull it off. Not just orbital transportation is on offer, but also orbital destinations in the form of commercial space stations, and suborbital research flights. This is the first conference of its kind since the new policy and since SpaceX launched and recovered its prototype space capsule. I wouldn’t miss it.

Watch this space for conference updates including video and pencasts of commercial space station developer Robert Bigelow’s keynote address, panels on orbital and suborbital vehicle development in progress, and NASA as customer for the new commercial space flight industry.